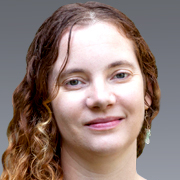 Ms. Kenney is an Academic Fellow at Cornell Law School, where she dedicates her research and writing to constitutional law, institutional design, and law and economics. Her research focuses on new approaches to cooperation and how to structure institutions at a micro- and macro- level using incentive-based alternatives to punishment such as reputation and empathy. Her work draws on literature in physics, mathematics, and evolutionary biology to look at innovations in game theory that focus on generosity, forgiveness, and altruism. Toward that end, Ms. Kenney is currently enrolled as a Concurrent Enrollment student at UC Berkeley seeking to fulfill prerequisite courses towards an intended Ph.D. in mathematical physics and game theory, and intends to publish a book on novel approaches to cooperation that combine physics game theory with law and economics.

Ms. Kenney is also an expert in First Amendment law. Previously, she was the Associate Director of Cornell Law School's First Amendment Clinic where she oversaw and litigated high stakes cases, including winning major victories at the federal district, circuit, and state court levels involving freedom of information and of the press, with a subspecialty in impact litigation related to science and technology. Her scholarship has appeared or is forthcoming in the California Law Review, the Fordham Law Review, the Loyola Los Angeles Law Review, and the Cardozo Arts & Entertainment Law Journal.

Ms. Kenney is also an Affiliated Fellow at the Information Society Project at Yale Law School, and a former Research Scholar in Law and Staff Attorney at Yale Law School's Collaboration for Research Integrity and Transparency as well as a Clinical Instructor at Yale Law School's Media Freedom & Information Access Clinic. Previously, she also taught at Stanford Law School, where she was a Thomas C. Grey Fellow; was a fellow at the National Women's Law Center; and was a litigator at Wilmer Cutler Pickering Hale & Dorr in Washington, D.C. She clerked for then-Judge Roger Gregory of the Fourth Circuit Court of Appeals and Judge Miriam Goldman Cedarbaum of the Southern District of New York. She graduated summa cum laude from Dartmouth College and received her J.D. from UC Berkeley School of Law, where she received the Philip & Barbara Kaplan Scholarship for academic excellence and commitment to public interest.