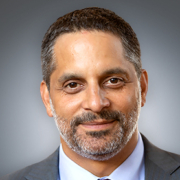 Eduardo M. Peñalver is a Professor of Law. He was the Allan R. Tessler Dean from 2014 to 2021, serving as the first Latino dean of an Ivy League law school. He will become the President of Seattle University on July 1, 2021.

Professor Peñalver’s scholarship focuses on property and land use, as well as law and religion. His work explores the way in which the law mediates the interests of individuals and communities. His writing on property has appeared in numerous leading law journals. His book, Property Outlaws (co-authored with Sonia Katyal), published by Yale University Press in February 2010, explores the vital role of disobedience within the evolution of property law. His most recent book, An Introduction to Property Theory (co-authored with Gregory Alexander), was published by Cambridge University Press in 2011.

Professor Peñalver received his B.A. from Cornell University and his J.D. from Yale Law School. Between college and law school, he studied philosophy and theology as a Rhodes Scholar at Oriel College, Oxford. Upon completing law school, he clerked for Judge Guido Calabresi of the United States Court of Appeals for the Second Circuit, and at the Supreme Court for Justice John Paul Stevens.

Professor Peñalver previously served as the John P. Wilson Professor of Law at the University of Chicago Law School (2012-2014) and taught at Cornell Law School (2006-2012) and at Fordham Law School (2003-2006). He has also been a visiting professor at Harvard Law School and Yale Law School.

READ MORE
Peñalver, Law School Dean, Named Seattle University President
Peñalver will step down as the Law School’s 16th dean – a post he has held since 2014, when he became the first Latino to lead an Ivy League law school – on January 1, 2021 but will remain a member of the law faculty through the spring term
Related News
Media Coverage

Ahead of the Curve: Here's What Law School Will Look Like This Semester