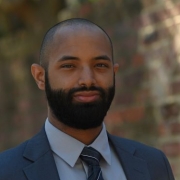 Emmanuel Hiram Arnaud is a Visiting Assistant Professor at Cornell Law School.  His research focuses on issues of criminal procedure, race in the law, and the application of federal criminal law and procedure in the territories of the United States.

Prior to joining Cornell, he worked as a fellowship attorney at Justice 360, as an appellate public defender at the Center for Appellate Litigation, and as an associate at Paul, Weiss, Rifkind, Wharton & Garrison in New York City.  He also clerked for Judge Juan R. Torruella of the U.S. Court of Appeals for the First Circuit and Judge Nelson S. Román of the U.S. District Court for the Southern District of New York.  He received his B.A. from Columbia University and his J.D. from Cornell Law School.