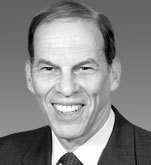 Mr. Yusem received his J.D. from the University of Pennsylvania Law School and his B.A. from Cornell University.