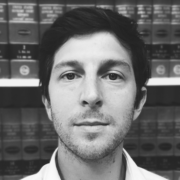 Tyler Valeska is the French Family First Amendment Fellow at the Law School. Prior to his appointment at Cornell, Mr. Valeska clerked for Judge Aleta Trauger, Middle District of Tennessee. Before clerking, he worked as a litigation associate in the Washington, D.C. office of Gibson, Dunn & Crutcher LLP. He is a graduate of Northwestern University School of Law, where he served as Executive Articles Editor of the Journal of Law & Social Policy, and the University of Alabama, where he was a University Fellow and a Blackburn Institute Fellow.