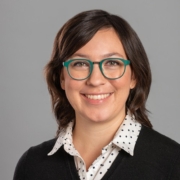 Alisa Whitfield is a Staff Attorney who supports the International Programs team at Kids in Need of Defense (KIND). Alisa has been working with immigrants and refugees since 2011, including internships with Asylum Access in Quito, Ecuador, and with the University of Cape Town’s Refugee Rights Project in Cape Town, South Africa. In the United States, Alisa worked in removal defense in California for over five years, both as a Deportation Defense Fellow at Van Der Hout LLP, and in the non-profit sector. Her removal defense work focused on appellate litigation, asylum cases, and working with youth and people with disabilities. From 2017 to 2019, Alisa was an Immigration Defense Attorney at the Alameda County Public Defender, where she focused on minimizing the immigration consequences of criminal convictions. Most recently, Alisa was a Clinical Teaching Fellow at the Immigration Justice Clinic at Cardozo School of Law where she taught immigration law and supervised law students. She received a BA in International Relations from Stanford University, and a JD from the University of Michigan Law School in Ann Arbor.