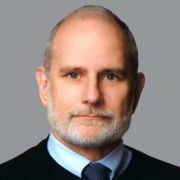 ANDREW J. WISTRICH was a Magistrate Judge of the United States District Court for the Central District of California from 1994 to 2018.

Following law school, Judge Wistrich served as law clerk to The Honorable Charles Clark of United States Court of Appeals for the Fifth Circuit. Subsequently, he was a partner in the Palo Alto, California office of Brown & Bain.

Judge Wistrich is a member of several professional associations, including the American Law Institute.