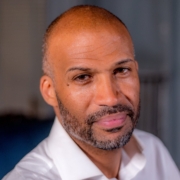 Carlton Williams is a movement lawyer and organizer dedicated to building and supporting liberation struggles. Mr. Williams has practiced criminal and civil rights law in Massachusetts for many years. He began his legal career as a criminal attorney with the Roxbury Defenders and later served as a racial justice attorney with a civil liberties non-profit. Mr. Williams has been an advocate on issues of war, immigrant rights, LGBTQ rights, and Black and Palestinian liberation. He is a member of the National Lawyers Guild and has served as the chair of its Massachusetts board of directors. He was part of the legal defense for the Occupy Boston movement, providing legal, bail, and court support and training to the thousands of participant-organizers. In 2015, he served on the working group that organized the inaugural Law for Black Lives convening and was a featured speaker in its RadTalks event. Mr. Williams was a Givelber Distinguished Lecturer on Public Interest Law at Northeastern University School of Law, teaching on social justice movements and the law. More recently he served as the executive director of the Water Protector Legal Collective, defending and supporting Indigenous environmental justice and sovereignty. Mr. Williams is a graduate of the University of Rhode Island and the University of Wisconsin Law School. He tweets at @carltonwilliams.