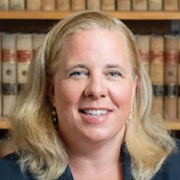 Elizabeth Aherne practiced law as a transactional attorney and litigator for more than 20 years.  She began her career as a tax associate working for Caldwalader, Wickerhsam and Taft LLP, a New York based law firm, and subsequently served in the same role at Freshfields Bruckhaus Deringer LLP, a London based law firm.  Prior to opening her own law practice in 2008, she served as an associate attorney with Schlather, Stumbar, Salk and Park, LLP in Ithaca, New York.  Aherne owned and operated her own private law practice in Ithaca, New York.  She handled cases involving a wide range of law including custody, divorce, wills, trusts and estates, business, real property, and personal injury law.  Her most important role was representing children in multiple different counties. In 2022, Elizabeth was elected by the 6th judicial district as the first female Supreme Court Justice seated in Ithaca, Tompkins County, New York.

Elizabeth lives in Ithaca, and is the mother of three boys. She is a graduate of Cornell University (Bachelor’s Degree in Economics), Georgetown University Law Center (Juris Doctorate Degree) and John Hopkins University (Master’s Degree in Education).