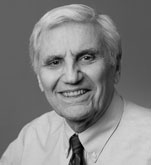 Faust F. Rossi is a national authority on evidence and trial advocacy. A 1960 graduate of Cornell Law School, Professor Rossi began his legal career as a trial attorney in the United States Department of Justice Honors Program. He subsequently became a litigation partner in a Rochester law firm and then joined the Cornell Law School Faculty in 1966. He retired in 2013.

Professor Rossi is the author of a text on expert witnesses and coauthor of the Handbook of New York Evidence. He was a national winner of the Roscoe Pound Jacobson Award for excellence in teaching Trial Advocacy.

Professor Rossi was a recurring visiting professor at Central European University in Budapest and a regular faculty member in the Cornell Summer Institute of International and Comparative Law in Paris. He has also given hundreds of lectures to lawyers and judges in the United States and Europe.