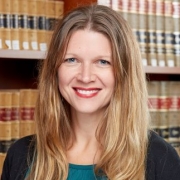 Kristen Stanley is an Assistant Clinical Professor in the Lawyering Program. She comes to Cornell from Vanderbilt Law School, where she taught legal writing and analysis to first-year J.D. students.

Professor Stanley also has her Masters in Social Work.  She specializes in understanding the effects of and effective treatment of trauma. Her focus is on the ways in which exposure to traumatic experiences impacts neurobiology, human development, brain functioning, and interpersonal relationships, particularly in the context of the criminal judicial system. She is also interested in the social, cultural, and political forces that shape exposure to, and recovery from, traumatic experiences.