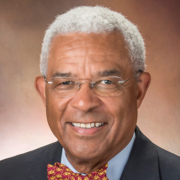 Larry Palmer is a leading scholar on the procedure and substance of legal interference in the medical field.

After receiving his LL.B from Yale Law School, Professor Palmer worked as an associate in a law firm, and then clerked for the Hon. A. Leon Higginbotham, Jr. of the U.S. District Court for the Eastern District of Pennsylvania.

He began his teaching career at Rutgers University School of Law, where he taught for five years before he joined the Cornell Law School Faculty in 1975. Very active in both the Ithaca and Cornell community at large, Professor Palmer spent eight years as Cornell's Vice Provost, and later as Vice President for Academic Programs.