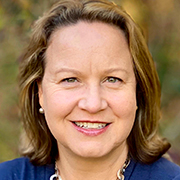 Leslie K. Danks Burke is a lawyer, public advocate in rural education and healthcare, and democracy entrepreneur. She is the founder and president of Trailblazers PAC, a national, nonpartisan, and game-changing political startup that mentors and invests in hyper-local candidates who take demonstrable action to follow higher ethical standards than law requires.

During her decade-and-a-half in tax and international law practice, Danks Burke grew increasingly concerned about political polarization and damage to the democratic republic arising from tax and economic inequity. In 2015, she put her law career on hold to focus on public advocacy. She launched a women’s political advocacy network across 14 rural counties in upstate New York. Then, in addition to her anti-corruption work through Trailblazers PAC, Danks Burke ran for New York State Senate, actively employing demonstrably higher transparency standards than law requires. She lost. Yet, her strikingly competitive race in a gerrymandered district, earning 12 points above the party registration, raises one data point in the question whether honesty diminishes or increases competitiveness.

Danks Burke has served on regional economic development workgroups, and the boards of the Tompkins-Cortland Community College Foundation, the Tompkins County Public Library Foundation, both the regional and the New York statewide Planned Parenthood healthcare affiliates, the Finger Lakes Women’s Bar Association, and the Women’s Bar Association of the State of New York.

Danks Burke’s anti-corruption work has been featured on NPR, and at national and international conferences in partnership with democracy-building organizations such as Transparency International, and the Anti-Corruption Advocacy Network. For three years, she provided weekly political commentary for the NBC affiliate, WETM-TV. Danks Burke holds BA degrees in international relations and history from the University of Colorado at Boulder, and a JD from the University of Chicago Law School.