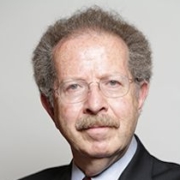 Menachem Z. Rosensaft is General Counsel of the World Jewish Congress. After clerking for two years for the Hon. Whitman Knapp, United States District Court Judge for the Southern District of New York, he was a litigator at several New York law firms and an international bank, headed a foundation engaged in cultural activities in Central and Eastern Europe, and was General Counsel of a major financial services firm in New York.

On May 5, 1985, he organized and led a demonstration at Bergen-Belsen in protest against visits that day by President Ronald Reagan and West German Chancellor Helmut Kohl to the mass-graves of Bergen-Belsen and the German military cemetery at Bitburg. In April 1987, he played a key role in convincing the government of Panama not to give sanctuary to Nazi war criminal Karl Linnas, and in ensuring Linnas's deportation from the United States to the Soviet Union. In December 1988, he was one of five American Jews who met in Stockholm, Sweden, with senior leaders of the Palestine Liberation Organization, resulting in the PLO's first public recognition of Israel. He was appointed to the United States Holocaust Memorial Council by President Bill Clinton in 1994, reappointed to a second five-year term in 1999, and served on the Council's Executive Committee from 1996 until 2003. In September 2010, President Barack Obama appointed Rosensaft to a third term on the Council.

He is the editor of God, Faith & Identity from the Ashes, Reflections of Children and Grandchildren of Holocaust Survivors (Jewish Lights Publishing). He has contributed numerous articles to publications such as the New York Times, Washington Post, Columbia Human Rights Law Review, Fordham International Law Journal, and the National Law Journal. He is also the editor of Life Reborn, Jewish Displaced Persons 1945-1951 (United States Holocaust Memorial Museum, Washington, D.C., 2001), co-editor, with Professor Yehuda Bauer, of Antisemitism: Threat to Western Civilization (published by the Hebrew University, Jerusalem, 1988), and co-author, with his daughter, Jodi Rosensaft, of "A Measure of Justice: The Early History of German-Jewish Reparations" (published as an Occasional Paper by the Leo Baeck Institute, November 2003).