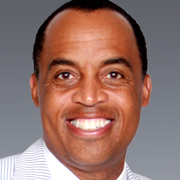 Michael Huyghue is president of Michael Huyghue & Associates LLC. He is widely regarded as one of the most prominent figures in the professional sports industry having a career that spans over 30 years. Huyghue has been a pioneer in the industry, paving the way for many other African Americans who followed in his footsteps.

Most recently, Huyghue was the Commissioner of the United Football League, comprised primarily of young National Football League players and former NFL Head Coaches. Huyghue founded and directed the UFL raising over two hundred million dollars in seed money. The UFL operated for four nationally televised seasons, competing directly against the NFL. The UFL saw limited viewership but over 150 of its players and dozens of its coaches found full time positions in the NFL.

In 1994, Huyghue was selected to run football operations for the NFL start up Jacksonville Jaguars. Under the leadership of Huyghue and then Head Coach Tom Coughlin, the Jaguars collected more wins in their first five seasons than any other new franchise in the history of the NFL, including a remarkable two AFC Championship game appearances.

Huyghue gained widespread prominence in 1991 as the youngest and one of the first black general managers in professional football with the NFL’s World League of American Football (Birmingham Fire). He went on to hold the most senior position in the league reporting directly to a committee of NFL owners. Huyghue lead operations for the league working overseas in Spain and Germany and became fluent in both languages.

Huyghue began his professional career as a legal assistant with the NFL Players Association under then Executive Director Gene Upshaw. He was hired away from the Players Association by the NFL Management Council in 1987 shortly after graduating from law school. As Labor Relations Counsel, Huyghue organized efforts on behalf of the NFL to direct replacement football games during that year’s player’s work stoppage. He also served as league counsel for the NFL member clubs in injury and non injury grievances, conducting over 200 arbitration hearings.

Under then NFL Commissioner Paul Tagliabue, Huyghue was appointed to numerous high ranking committees, including the Management Council Executive Committee, the College Advisory Committee, and as the senior member of the Committee on Minority Hiring.