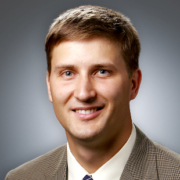 Oskar Liivak, Professor of Law, graduated from Rutgers College with highest honors in 1994, received a Ph.D. 2000 in physics from Cornell University focusing on techniques for determining protein structure, and received a J.D. from the Yale Law School in 2005.

From 2000 to 2001, he was a post-doctoral scientist working on physical realization of quantum computing in the Quantum Information Group at IBM's Almaden Research Center in San Jose, California. Prior to law school, he served as a patent agent in the Boston office of Fish and Richardson P.C. Most recently, Professor Liivak served as a law clerk to Judge Sharon Prost on the United States Court of Appeals for the Federal Circuit.

READ MORE
Rescuing the Invention from the Cult of the Claim
Despite its promise of precision and uniformity, our modern invention-less system is anything but precise and uniform. This article argues that the trouble stems from this trivial vision of the invention. It leads to meaningless claim interpretation, to an incomplete a vision of the disclosure requirements, and to a system that regularly violates one of patent law’s few constitutional limitations.