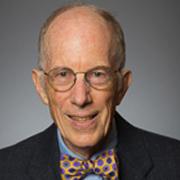 Peter W. Martin, the Jane M.G. Foster Professor of Law, Emeritus, and former dean of Cornell Law School, writes, speaks, and consults on topics that concern the impact of technology on the functioning of law and legal institutions.

After his graduation from Harvard Law School, Professor Martin spent three years in the Air Force General Counsel's Office, and then began his teaching career at the University of Minnesota Law School in 1967. He joined the Cornell Law School Faculty in 1972, and served as Dean from 1980 to 1988.

Professor Martin co-founded Cornell's Legal Information Institute (LII) with Thomas R. Bruce in 1992, the first Internet law resource and still the most heavily used non-profit legal Web site. In addition to serving as the LII's co-director for over a decade, Professor Martin has created an electronic treatise and database on Social Security law, a Web reference, ebook, and accompanying online tutorials on legal citation, and written numerous articles on uses of digital technology in law and legal education. Between 1996 and 2007 he offered law courses employing electronic materials prepared by him to students at over a dozen law schools via the internet. His most recent articles are available on SSRN. He blogs at: citeblog.access-to-law.com