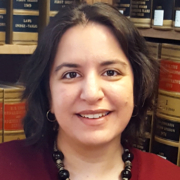 After earning her J.D. from Cornell Law School in 2001, Sabrina clerked for a Magistrate Judge of the United Stated District Court in the Northern District of Ohio. She subsequently practiced law in California, including working as a trial attorney for Safeco Insurance Company. She received her M.L.I.S. with a specialization in Law Librarianship from the University of Washington in 2008 and spent the next ten years working at the Diamond Law Library at Columbia Law School as Special Collections and Services Librarian. During that time she also managed their revenue generating firm subscription services, digitization initiatives, an extensive collection of rare books, archives, and taught legal research.