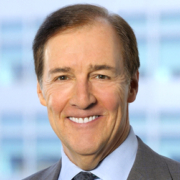 Ted Grossman is Of Counsel at Jones Day.His practice covers commercial litigation, class actions (he successfully defended the largest commercial class action in U.S. history), and mass tort product liability (Japan's Nikkei newspapers called him "the top product liability lawyer in the United States"). In commercial cases, he represents corporate plaintiffs and defendants, with uniform success in both. In a recent two-month tabloid-frenzied trial, Ted obtained an injunction against Martha Stewart Living Omnimedia and a judgment for tortious interference against J. C. Penney for its enticement of Martha Stewart to breach Macy's contractual exclusivity. For many years, Ted served as R.J. Reynolds' lead outside counsel, helping guide it through successive waves of mass individual and novel aggregated litigation. In regulatory and constitutional litigation, he has served as lead counsel in cases brought by or against virtually every federal department. He regularly advises boards, CEOs, and general counsel of leading clients.

Ted is a Fellow of the American College of Trial Lawyers, American Bar Foundation, and American Law Institute and is an adjunct professor at Cornell Law School. He was profiled in the National Law Review's "Winning" supplement (as a "shutout" pitcher turned to for difficult cases) and in its "Defense Verdicts of the Year." He has appeared on the CBS Evening News, ABC World News, many other media, and was recently profiled in Crain's Cleveland Business ("King of the Court").