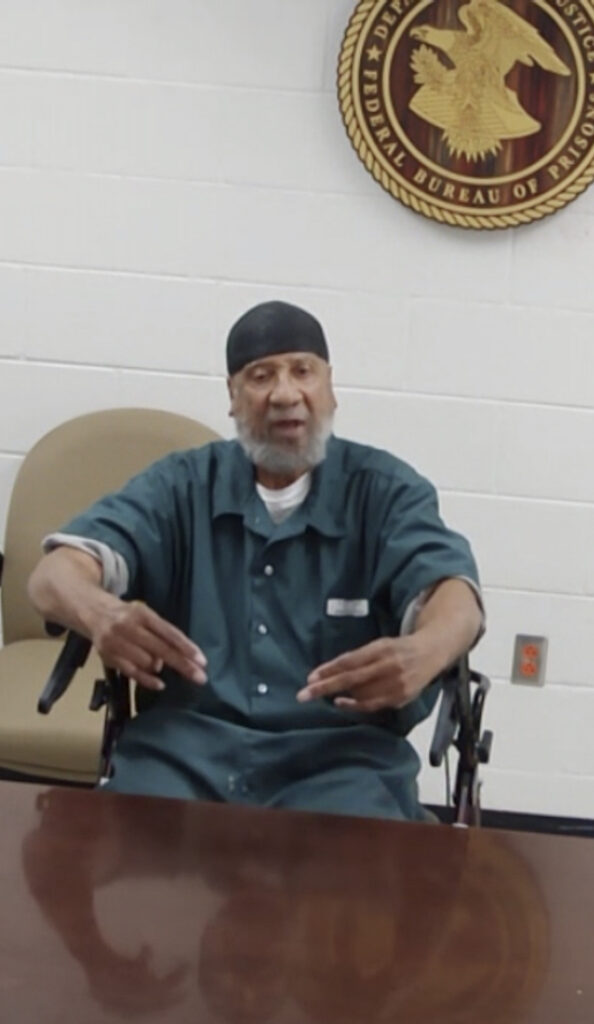 A screenshot of Jamil Al-Amin taken during a May 2021 video call with Arun Kundnani.

The First Amendment Clinics at Cornell Law School and Arizona State University’s Sandra Day O’Connor College of Law secured access last week to in-person interviews with the incarcerated civil rights leader Jamil Al-Amin, formerly H. Rap Brown, on behalf of scholar and journalist Arun Kundnani. Prior to the clinics’ involvement, Kundnani had made three separate unsuccessful interview requests to the former warden of the Federal Correctional Complex in Tucson, Arizona, where Al-Amin is housed. The former warden denied access to Al-Amin in part based on his determination that an interview with the nearly blind septuagenarian would purportedly reelevate his status at the prison and disturb the good order of the institution.

Al-Amin played a leading role in the civil rights movement in the 1960s as the fifth chair of the Student Nonviolent Coordinating Committee. In 2002, he was convicted of murder and sentenced to life in prison without the possibility of parole for the killing of a sheriff’s deputy in Atlanta. Al-Amin and his supporters continue to maintain his innocence.

Kundnani sought interviews with Al-Amin to complete his research for a book chronicling Al-Amin’s life. Without access to Al-Amin, there would have been a substantial risk that major events pertaining to his civil rights work, including his activities during a nineteen-month period when he operated in secret, would never be recorded.

After the clinics demanded access on First Amendment grounds and promised to pursue legal action if the renewed request was denied, a new warden granted Kundnani telephone and video interview access to Mr. Al-Amin this spring and in-person access this summer.

“I cannot convey how grateful I am for the work the clinics did to make this happen,” Kundnani said. “The interviews were fantastically useful, and I feel like, with the earlier phone calls, I’ve now had sufficient access with Jamil Al-Amin to do justice to his story.”

Kundnani is the author of The End of Tolerance: Racism in 21st Century Britain and The Muslims are Coming! Islamophobia, Extremism, and the Domestic War on Terror.  His book on Al-Amin aims to explore the life of the former chair of the Student Nonviolent Coordinating Committee, including his activism, convictions, and the governmental institutions that surveilled him.

“We are thrilled that our clinic students could assist Dr. Kundnani in his work on one of the great untold stories of the civil rights era,” said Heather Murray, Managing Attorney of the Cornell Clinic’s Local Journalism Project. “Too often prison officials around the country deny requests to prisoner interviews arbitrarily. We are pleased that Warden Catricia Howard chose to reverse the prior denials after we renewed Dr. Kundnani’s request.”

“Cases like this concerning matters of great public interest and concern demonstrate why access to prisoners is so important,” said ASU Clinic Director Gregg Leslie. “And journalists need access not only to interview prominent prisoners, but also to cover, for example, the conditions of confinement during COVID-19 outbreaks and the effectiveness of their rehabilitative programs. Dr. Kundnani’s story about Mr. Al-Amin’s life will be an important work that never should have been thwarted because previous prison officials were not willing to let a prisoner talk.”