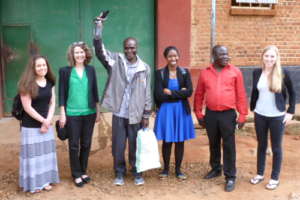 On June 5, 2022, the government of Malawi issued a press release announcing that President Lazarus Chakwera had commuted the death sentences of 22 death row prisoners. The move came after years of campaigning by human rights advocates in Malawi and beyond, including a petition authored by two students of Cornell Law School’s International Human Rights Clinic.

“The President’s decision is in line with the movement away from capital punishment throughout Sub-Saharan Africa,” says Clinical Professor Sandra Babcock, who has worked on criminal justice issues in Malawi for the last fifteen years.

In the spring of 2017, Aaron Smith ’18 and Charlotte Hopkinson ’19 drafted a clemency petition on behalf of every prisoner then on death row in Malawi (21 at the time). The petition emphasized Malawi’s affirmation that it would maintain a moratorium on executions and cited regional examples of African presidents who had granted mass commutations of death row prisoners.

Smith then traveled to Malawi with Babcock to present the petition to all the death row prisoners, reading it aloud so that it was accessible to those who could not read. Babcock recalls, “They all sat on the ground before him in the blazing sun as he read the petition line by line. As he read aloud, a Malawian colleague translated his words into Chichewa. The prisoners periodically burst into applause to show their appreciation, particularly when Aaron spoke about the dehumanizing conditions on death row.”

The petition was then take up by three Malawian lawyers, Ian Twea, Alexious Kamangila, and Chipiliro Lulanga, all of whom had visited Cornell as part of a capital defense training organized by the Cornell Center on the Death Penalty Worldwide. They submitted the petition to the Commissioner of Prisons and the Office of the President of Malawi and subsequently spent years building a case for commutation. Together with the London-based NGO Reprieve, Kamangila and Lulanga organized press briefings and obtained the support of faith-based organizations as well as human rights advocates.

Babcock emphasizes the importance of Twea, Kamangila, and Lulanga’s work, along with the support of Malawian civil society. She notes that the International Human Rights Clinic, together with the Malawian Paralegal Advisory Services Institute, conducted a survey of traditional village leaders in Malawi to ascertain their attitudes toward the death penalty. The resulting report, with contributions from Hopkinson and Smith, found that 94 percent of traditional leaders opposed the death penalty, with many saying they objected to it because it obviates any possibility of rehabilitation.

“Our clemency petition reflected the deep-seated values of Malawian society,” says Babcock, “including a belief in the possibility of human redemption.