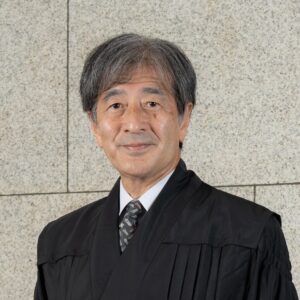 “With shoes that fit my feet, I would be able to walk to anywhere I want to go.” Justice Akira Ojima, LL.M. ’90, cites the first line of Atsuko Suga’s book Yourcenar’s Shoes as a personal motto, and he’s obviously found a pair exactly his size. Justice Ojima’s shoes have taken him through a long and distinguished judicial career in his native Japan, and an American sojourn that included graduating from Cornell’s LL.M. program in 1990. And, in July, he took office as a justice of the Supreme Court of Japan.

After graduating from the University of Tokyo Faculty of Law in 1983 and serving as a judge for several years, Ojima was sent to the United States by Japan’s Supreme Court to study at an American law school there. He chose Cornell Law for its sterling academic reputation, as well as the “ideal environment” Ithaca promised for his wife and two-month-old son. Ojima went on to study U.S. judicial practice in the chamber of fellow Cornell graduate Aubrey E. Robinson Jr., LL.B. ’47, chief judge of the U.S. District Court for the District of Columbia.

Ojima credits his Cornell-facilitated education on the U.S. legal system with helping him in his role as a trade negotiator for Japan during the Uruguay round negotiations under GATT, and for his book Reading U.S. Supreme Court Cases. “Education obtained at Cornell was an indispensable tool,” he said.

Ojima was the first judge from Japan to attend Cornell, but not the last. “I graduated in 1990, and after that, from 1992 to 2022 nine Japanese judges entered Cornell Law School,” he said. “You can easily understand from this fact that the Japanese judiciary and Cornell have strong connections and good cooperation.” To this day, he enjoys gathering with other Japanese alumni of the Law School.

“I am so honored and delighted to be one of the alumni of Cornell,” he said.