By Kayleigh Yerdon, Francisco Micheo, and Amanda Miner May 20, 2021

Beginning in early 2020, a team of three third-year Cornell Law students worked with professors Beth Lyon and Jaclyn Kelley-Widmer on an unusually complex case involving a young farmworker from Guatemala who was going to be deported from the United States in spite of his compelling reasons to remain here lawfully. In early March 2021, the team learned that their efforts to secure Special Immigrant Juvenile Status for their client had been successful. Following is an account by the three students—Kayleigh Yerdon ’21, Francisco Micheo ’21, and Amanda Miner ’21—of their client’s case and how it was successfully resolved.

Julian arrived alone in the United States in February 2016 at age sixteen as an “unaccompanied minor”—the legal term for children who arrive at the border without a parent or guardian. He began living and working as a farmworker in upstate New York. As a teenager, he was the victim of a broken system—a system that detained him for 22 days upon his arrival in the United States, released him into the custody of an abusive uncle, and required him to navigate an impenetrable legal frontier without command of the English language or resources to obtain legal counsel. Although he made every attempt to comply with the system’s demands, he eventually missed a court hearing—because he never received communication providing him the date and time of that hearing. Nevertheless, in December 2019, an immigration judge in Buffalo, New York, ordered him “removed,” or deported, from the United States because of that missed hearing. Julian’s legal journey was immediately much more complicated with the removal order on his record, and he still needed to find a reliable lawyer. 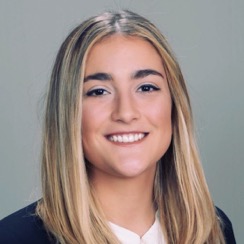 Julian was raised in an impoverished community in Huehuetenango, Guatemala. His father left the family when Julian was just two years old and never provided for Julian or his sister. After leaving Julian behind, Julian’s father contacted him only once more during his childhood—to ask for money. Other than this instance, his father played no role in his childhood. Though Julian had a good relationship with his mother, she had difficulty in financially supporting the family in the rural community where they lived.

In light of these economic challenges, Julian was only able to attend school until the age of thirteen, when he dropped out to help his family earn money. He began working as a farmer with his grandfather. All of the money that Julian made from his hard work went to support his family. Then, when he was just fourteen, local gang members tried to recruit Julian to join them. Gang members confronted him on several occasions, and Julian was threatened with violence each time. Although he was under a lot of pressure from the gangs, he never joined a gang because he knew that it was a dangerous lifestyle for young boys and that the gangs in his community often attacked or robbed innocent citizens. 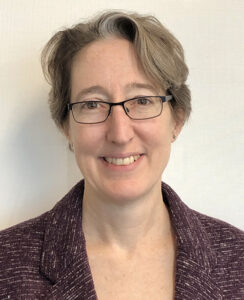 After several years of evading gang violence, Julian fled Guatemala for good, hoping to find safety in the United States. In February 2016, he arrived at the port of entry in El Paso, Texas, and immigration agents detained him upon entry. Eventually, he was released and headed to upstate New York into the custody of one of his uncles, who took in Julian only to exploit him for free manual labor. Eventually, Julian ran away from his uncle and found a home with friends in another upstate New York town. Meanwhile, Julian dutifully kept track of his court hearings and attended all of them as he searched for a lawyer to represent him.

SIJS is the only immigration process designed specifically to provide lawful permanent residence (or a “green card”) for children. Immigrant children may be eligible for SIJS if they have been abused, neglected, or abandoned by one or both of their parents, and it is not in the best interest of the child to return to his or her home country.

However, even though it is intended to help minors, SIJS is one of the most complex immigration applications that exists because it requires interaction with at least two or three adjudicatory bodies. SIJS always involves both a state court process and an administrative immigration filing with U.S. Citizenship and Immigration Services (USCIS)—and in Julian’s case, a removal order from the immigration court was in the mix as well. As such, he would need to jump through the hoops of all three processes to be able to receive SIJS.

First, a SIJS applicant must obtain a state court order from a “juvenile court”—typically a family or surrogate’s court—in the state where the child is living. In the family court order, a judge must explicitly find that the minor—defined in New York State and in the Immigration and Nationality Act as a child under the age of 21—cannot viably reunify with their parents due to abuse, abandonment, or neglect, and cannot return to their home country. Second, the applicant must then file a petition with USCIS, including the state court order in the application materials. And third, in Julian’s case, he would need the court to reopen his case and rescind the removal order, because USCIS cannot approve a SIJS application with a removal order on record. 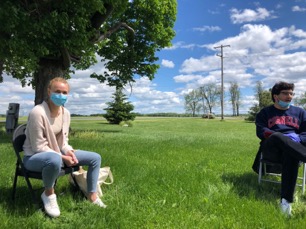 Pandemic lawyering: In summer 2020, Yerdon ’21 and Micheo ’21 conducted hearing preparation in an open field near the farm where Julian works.

Despite the complications in Julian’s case caused by the Court’s removal order, Cornell Law students Amanda Miner ’21, Francisco Micheo ’21, and Kayleigh Yerdon ’21, working under Professor Lyon, knew that Julian had the potential to move to re-open his case precisely because he had never been informed of his hearing date. It turned out that Julian’s missed court date was not his fault: even though he had diligently called the government’s immigration hotline for more information about the scheduling of his hearing, the date and time of his hearing was never available on the phone system. Similarly, he never received a Notice to Appear in the mail. In essence, Julian could not have attended his hearing because he didn’t know about it—but the judge still ordered him removed in absentia, meaning without his presence, because he failed to appear.

Yet, in order to convince a judge to re-open Julian’s case, Professor Lyon explained that that Julian’s lack of notice would not be enough: in addition, the team would need to show the judge that Julian also had a strong case for SIJS. After hearing Julian’s story, the students got to work finding Julian a legal guardian who could serve as a mentor and a friend for Julian and who would be able to provide more than his family back in Guatemala. Notwithstanding complications caused by the COVID-19 pandemic, Julian was able to form a strong relationship with a local volunteer, and it was clear that he would benefit from her guardianship. Miner, who was participating in the Clinic for her second semester and had compiled several guardianship applications in the past, then guided the team towards the speedy filing of a guardianship application with the Surrogate’s Court in Julian’s home county court, detailing Julian’s history of parental neglect and the strength of his relationship with his proposed guardian. 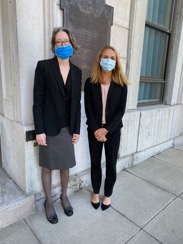 Professor Beth Lyon and Yerdon ’21 outside the court for Julian’s guardianship hearing.

Once the filing was accepted, Julian was scheduled for a hearing in Surrogate’s Court in which the judge would decide on the guardianship petition and determine whether he qualified for SIJS. Because of the ongoing COVID-19 pandemic, the students conducted several rounds of masked hearing preparation with Julian outdoors to make sure he was prepared for court.

In June 2020, the Surrogate’s Court Judge granted Julian’s guardianship order and found that Julian was eligible for SIJS. First, a guardianship order affirmed that appointing Julian’s proposed guardian was in Julian’s best interest. Second, the judge found that Julian’s reunification with his father was not viable due to his abandonment of Julian and his lack of financial or emotional support throughout Julian’s youth. Further, the judge declared that Julian had found a safe and stable home in the United States where his needs would be met and found that returning him to threats of gang violence and abandonment in Guatemala would be harmful for Julian’s development.

With these orders in hand, Miner, Micheo, and Yerdon began working with a second Cornell Law Professor, Associate Clinical Professor Jaclyn Kelley-Widmer of Cornell’s 1L Immigration Law and Advocacy Clinic. Kelley-Widmer agreed to help the team pursue the reopening of Julian’s case in immigration court—a necessary procedural step to allow USCIS to grant Julian SIJS. Throughout the summer of 2020, the students worked alongside Kelley-Widmer to draft a motion to reopen the case, which included showing that the Surrogate’s Court orders that had already been granted in Julian’s favor and arguing that Julian never had notice of the hearing he inadvertently missed. By the time Kelley-Widmer filed Julian’s motion to reopen, Julian’s case was so strong that opposing counsel from Immigration and Customs Enforcement actually joined the Clinic’s motion to reopen Julian’s case—indicating that the government agreed an injustice had been committed against Julian and that it should be rectified. With that, the immigration judge reopened Julian’s case and withdrew the removal order against him. With both the guardianship and the court reopening secured, the path was finally clear for Julian to file his SIJS application with USCIS.

Finally, the students were able to file an I-360 for Julian in August 2020—the last formal filing required for him to obtain SIJS status. After several months of waiting, in March 2021, Julian’s I-360 was approved! Although he is still waiting to receive his actual visa, this approval means that Julian is now allowed to remain and live lawfully in the United States. On a phone call with Micheo in March 2021, Julian said that he is incredibly grateful to the Clinic for helping him pursue his dream of seeking a better life in America and that he could never have navigated this process if not for the help of the Clinic team. He is looking forward to studying English, continuing to play soccer with his friends, and growing his relationship with his guardian.