On January 28, with the temperature dropping to the low teens, the Law School held a virtual fireside chat between Eduardo Peñalver, who becomes the president of Seattle University on July 1, and Professor Jens David Ohlin, who became interim dean on the first of January. “This is a time of great change at Cornell Law School,” said Franci J. Blassberg ’77, introducing the two deans and launching into a conversation about the transition of leadership and “the new and ongoing challenges the Law School is likely to face in 2021.” 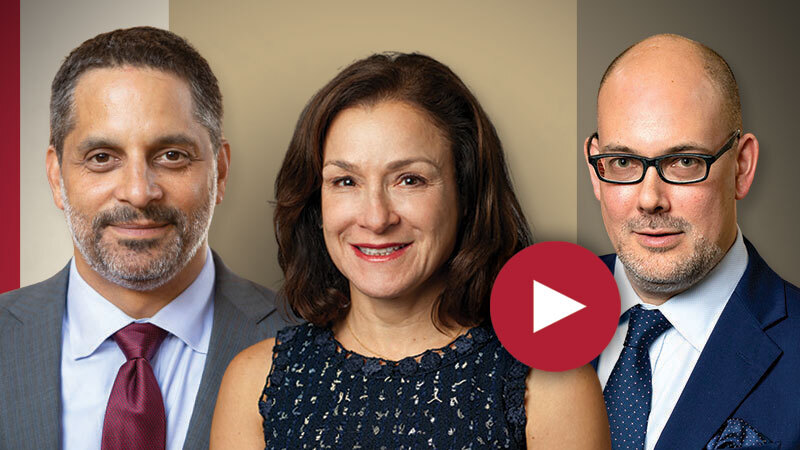 The question about Peñalver’s decision was resolved first, with the former dean talking about the importance of being close to his family, and his desire to keep working as an administrator, which would be unlikely at Cornell when his second term as dean ended in 2023. “I’m going to terribly miss this place, and it’s really hit home since I stepped down and started turning physically toward Seattle,” said Peñalver, with a photo of the library in the background as he talked about common ground between the two schools.

“Cornell and Seattle are both very mission-driven institutions that have values I share, that resonate for me,” he continued. “Cornell’s land-grant mission, that any-person-any-study ethos has always inspired me. It inspired me to come to Cornell as an undergraduate, brought me back as a faculty member, and made me really proud to serve the community as dean. Seattle is a Jesuit university that’s very much committed to similar values of inclusion and excellence, and that’s a big draw for me.”

Blassberg asked Ohlin about the beginning of his term as interim dean, which is expected to last until the next school year. “It has been a trial by fire, with a lot of work and a renewed appreciation for everything that Eduardo has done,” said Ohlin, twenty-eight days into the new position. “The thing that comes to mind right away is teaching: How do we deliver our educational services in this COVID era? This sounds simple but turns out to be bureaucratically and technologically complicated to accomplish. The other things that are looming large in my thoughts are faculty recruitment, which is going full-steam ahead, and alumni engagement. I want to plan for a return to normalcy as quickly as the public health situation will allow.”

More questions and answers followed. Both Peñalver and Ohlin believe the pandemic will bring lasting changes to the academy, enabling a hybrid of in-person/online instruction, adding the possibility of virtual lectures and mini-courses, deepening the partnership between Cornell Law and Cornell Tech, and increasing opportunities for collaborations with overseas law schools. Now that we’re all used to Zoom meetings, the search for new faculty members—Cornell is still hiring, though many other law schools aren’t—can grow shorter, and the acceptance of working from home can make it easier for trailing spouses to keep their current jobs when they move to Ithaca.

In the meantime, said Ohlin, even with the added stress of the pandemic, current students are doing well, responding in surveys that they love their courses, their professors, and their in-class training. Despite the pandemic, the Law School’s clinics are still meeting with clients, the job market remains promising, especially at large law firms, and Cornell administrators are pushing forward with plans for courses and clinics that address racial justice.

Then, with time for one last question, Blassberg asked: What sets Cornell apart in the minds of potential employers? What is the Cornell difference? “For me,” said Ohlin, “it’s that our professors share this bold, visionary view of the law. They’re reconceiving large ideas in their fields of study, but at the same time, they’re concerned with how the law operates on the ground. One thing that’s great about the Cornell approach is that we’re operating at 10,000 feet, and we’re also operating at ten feet, right with our feet firmly planted on the ground, and you can see that in our graduates.”

“Absolutely right,” said Peñalver, taking the last word. “The secret sauce, from the point of view of employers, is our strong sense of community and the way our graduates are team players. That gives them a real leg up, because when they get into the workplace, the importance of not having sharp elbows and the importance of being good team players become so crucial to the success of their organization. I hear this from so many different places: that our students act differently than students from other law schools. They sing each other’s praises, they love to work together, and they really get along across their own disagreements. That translates into how they practice law, and that collaborative, collegial personality is a Cornell trait.”