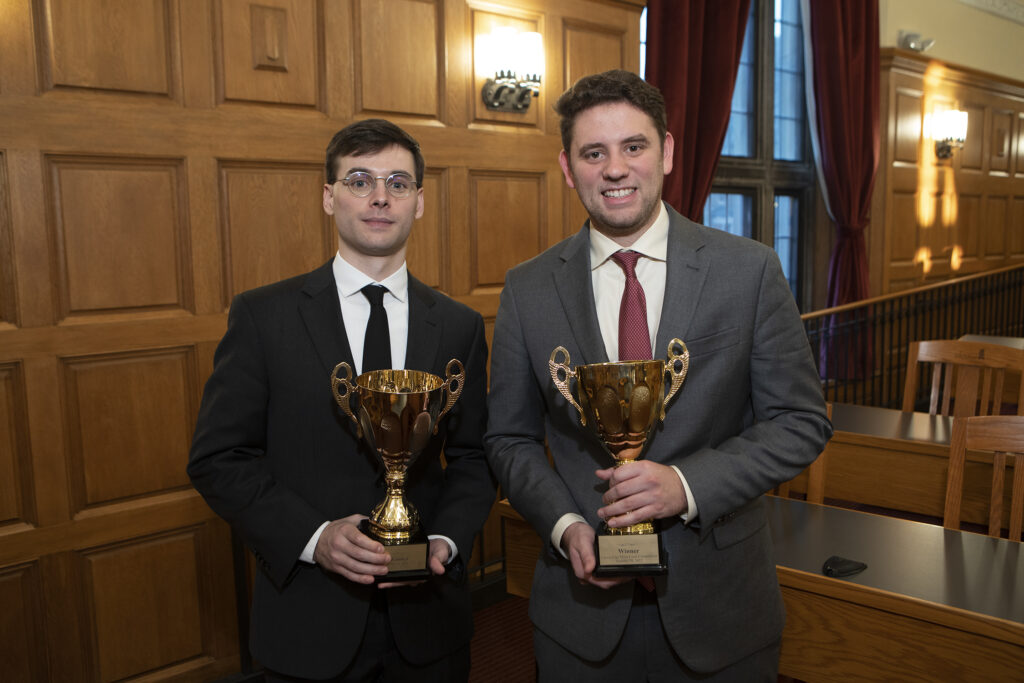 On Saturday, October 29, members of the Law School community gathered in the MacDonald Moot Court Room for the final round of the 2022 Cuccia Cup Moot Court Competition. After weeks of intense preliminary rounds, it came down to the final teams comprised of Steve Mirsen ’23 and Michael Demers ’24, arguing on behalf of the petitioner, and Marie Nercessian ’24 and Alexander Demircan ’24, who argued on behalf of the respondent. In the end, Mirsen and Demers were named Cuccia Cup champions.

In the case, Securities & Exchange Commission v. Wheeler, the competitors advocated for their clients on three issues before the Supreme Court of the United States: 1. whether the SEC’s in-house adjudications for civil penalties violate the 7th Amendment right to a jury trial; 2. whether the SEC’s enforcement authority violates the Non-Delegation Doctrine; and 3. whether the procedure for removing SEC Administrative Law Judges violates Article II of the Constitution.

At the end of the competition the Moot Court Board also announced that Houston Brown ’23 and Maria Kearns-Galeano ’23 were the winners of the Louis Kaiser Best Brief Competition.

“Both teams worked very hard, and their efforts certainly paid off in their excellent performances before a very challenging and thoughtful bench,” said Charlene Hong ’23, chancellor of the Moot Court Executive Board. “Getting to know the judges and learning from them was the most memorable highlight of the weekend for the Board and competitors alike.”

Prize money for the competition is funded annually through endowed gifts from the Cuccia family. Prizes for the Best Brief are funded through an endowed gift from Louis Kaiser LL.B. ’21.

The Cuccia Cup is Cornell Law School’s only internal competition in which competitors argue in teams of two. Students who participate in the Cuccia Cup help fulfill part of the requirements to join the Moot Court Board.