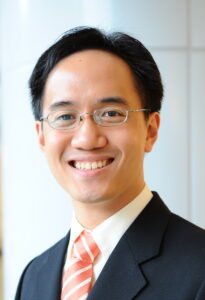 “Yun-chien Chang is a world leader in two important areas,” says Jens Ohlin, Allan R. Tessler Dean and Professor of Law. “I’m so happy to welcome him to Ithaca. He will continue the legacy provided by Jack Clarke, while at the same time augmenting our faculty’s research and scholarship with empirical methodologies. We could not have found a better scholar and teacher to lead this program.”

Chang’s current academic focus is economic, empirical, and comparative analysis of private law, particularly property law, as well as empirical studies of the judicial system. He has authored and co-authored more than 10 books and 100 plus journal articles and book chapters, and his English articles have appeared in leading journals around the world. He was recently appointed as an associate reporter at the American Law Institute.

The Jack G. Clark professorship occasions a return to the Empire State for Chang, who was born in New York City. It is also a return to the locus of some key moments in his early career. Chang gave his first academic conference presentation at Cornell Law School’s Conference on Empirical Legal Studies in 2008 and received his first publication in the school’s Journal of Empirical Legal Studies in 2009. He was also mentored by the late Professor Ted Eisenberg.

“For me, as an empiricist and property law scholar, to join Cornell Law School—renowned for its position in the movements of both empirical legal studies and progressive property rights—is thrilling,” says Chang.

“In many ways, Cornell Law School, its journal, and its faculty member promoted my academic career since more than a decade ago,” he says. “Now I look forward to helping the younger generation in similar ways.”

The Clarke Program in East Asian Law and Culture, funded by a gift to Cornell Law School by Jack and Dorothea Clarke, aims to foster collaboration that brings to light new questions and new answers on subjects of pressing contemporary concern. Through a variety of activities and events, including fellowships, conferences, lectures, collaborative research projects, short and long-term scholarly exchanges, and student exchanges, it seeks to expand the purview of legal scholarship and to develop new ways of thinking about transnational law, politics, and culture.